Be the first to review this product
Item #:
155192KIN
Availability: In stock

Availability: Downloadable and Digital Access items are non-refundable
There are thirty essays in this volume, representing Lutheran churches throughout the world.
Skip to the end of the images gallery 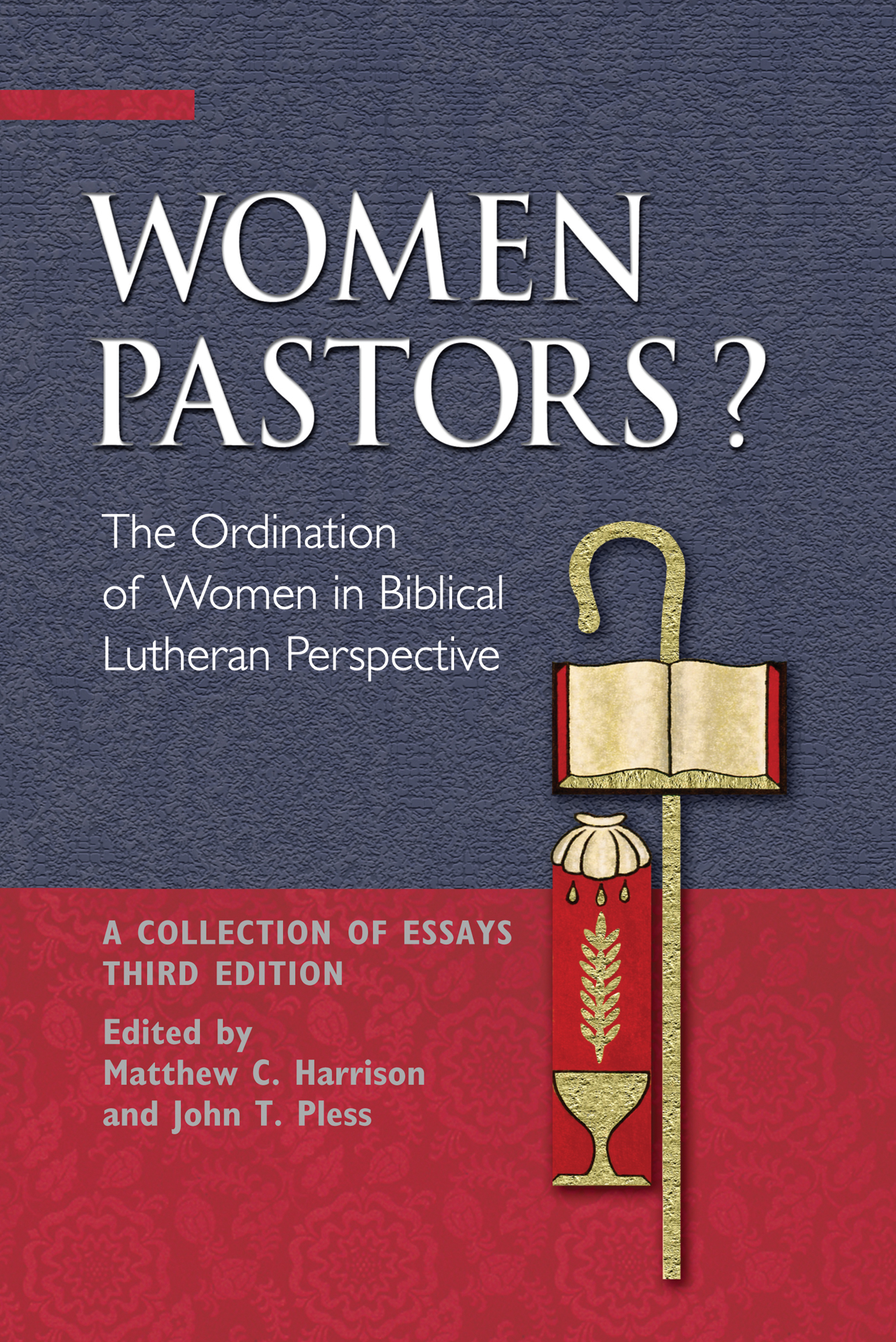 This updated edition adds six additional essays, three which are from women offering a female voice on the subject of the role of women in the Church. The thirty essays in this volume represent Lutheran churches throughout the world. The essays are divided into four sections: Biblical studies, historical studies, doctrinal studies and practical studies.

"It is striking that in the ancient Near East, where female deities and priestesses were abundant, Israel was told to have only male priests. Similarly, in the Greco-Roman world, where female gods and priestesses flourished, the Church restricted the apostolic-pastoral office to men. This volume is to be commended for similarly resisting the prevailing cultural novelties by supporting, in a scholarly and churchly manner, the God-given order for the Church's ministry. Women as well as men are blessed when they hear and follow the living, healing voice of Jesus in the prophetic and apostolic Scripture."

Phoebe: A Role Model for Deaconesses Today by Deaconess Cynthia Lumley
Dr. Cynthia Lumley, associate director of deaconess studies at Concordia Theological Seminary, Fort Wayne, Indiana, takes up the case of Phoebe, who is mentioned briefly in Roma. 16:1-2. Lumley demonstrates how this Chrisian woman served not as a minister of the Word but in a way that reflected the sacrificial character of Jesus Christ in her support of the work of apostolic ministry.

Disciples But Not Teachers:1 Corinthians 14:33b-38and 1 Timothy 2:11-15 by Dr. John Kleinig
Dr. John Kleinig, recently retired after a distinguished teaching career as pastor and seminary professor in the Lutheran Church of Australia, examines 1 Cor. 14:33b-28 and 1 Tim. 2:11-15, demonstrating that women are and must be disciples of Jesus but are not to teach in the liturgical assembly.

The Use of Tractate 26 to Promote the Ordination of Women by John Kleinig
In this shorter piece, Dr. Kleinig argues that Philip Melanchthon’s confession that the ministry of the New Testament is not bound to persons, as was the Levititcal priesthood of the Old Testament, does not open the way for the ordination of women [or actively homosexual persons!]. On the contrary, Melanchthon grounds the authority of the office on the institution of Christ in contrast with the purely human authority of the papacy. The ordination of women is an act of human authority; it cannot be demonstrated as being instituted by Christ.

Giver to Receiver: God’s Design for the Sexes by Adriane Dorr
Adriane Dorr, managing editor of The Lutheran Witness, examines God’s design for man and woman noting that the differences between male and female are reflected in God’s ordering of the life of both family and church for our blessing.

Vocational Boundaries: The Service of Women within The Lutheran Church—Missouri Synod by Kimberly Schave
Deaconess Kimberly Schave applies the doctrine of vocation to the issue of the ordination of women in “vocational boundaries,” lifting up how women are called by God to serve in home, church and world. Complete Table of Contents

The New Testament and the Ordination of Women — Henry P. Hamann

Didaskalos: The Office, Man and Woman in the New Testament — Bertil Gärtner

Ordained Proclaimers or Quiet Learners? Women in Worship in Light of 1 Timothy 2—Charles A. Gieschen

The Ordination of Women: A Twentieth-Century Gnostic Heresy?—Louis A. Brighton

Women in the History of the Church: Learned and Holy, But Not Pastors—William Weinrich

The Use of Tractate 26 to Promote the Ordination of Women—John W. Kleinig

Liberation Theology in the Leading Ladies of Feminist Theology—Roland Ziegler

The Ordination of Women and Ecclesial Endorsement of Homosexuality: Are They Related?—John T. Pless Section III: Systematic Theology

Twenty-three Theses on the Holy Scriptures, the Woman, and the Office of the Ministry—Bo Giertz

The Ordination of Women and the Doctrine of the Holy Trinity—John W. Kleinig

May Women Be Ordained as Pastors?—David P. Scaer

The Office of the Pastor and the Problem of the Ordination of Women Pastors—David P. Scaer

The Women’s Ordination Debate in the Lutheran Church of Australia: An Open Response to the Initial Report of the Commission on Theology and Interchurch Relations—Gregory Lockwood

Gender Considerations on the Pastoral Office: In Light of 1 Corinthians 14:33–36 and 1 Timothy 2:8–14—Robert Schaibley

“It Is Not Given to Women to Teach”: A Lex in Search of a Ratio—William Weinrich

Vocational Boundaries: The Service of Women within The Lutheran Church—Missouri Synod—Kimberly Schave

How My Mind Has Changed—Louis A. Smith