Add to List
Luther's authorized, final edition of the Church Postil, edited originally by Caspar Cruciger for the summer half of the year, is presented here in clear English.
Skip to the end of the images gallery 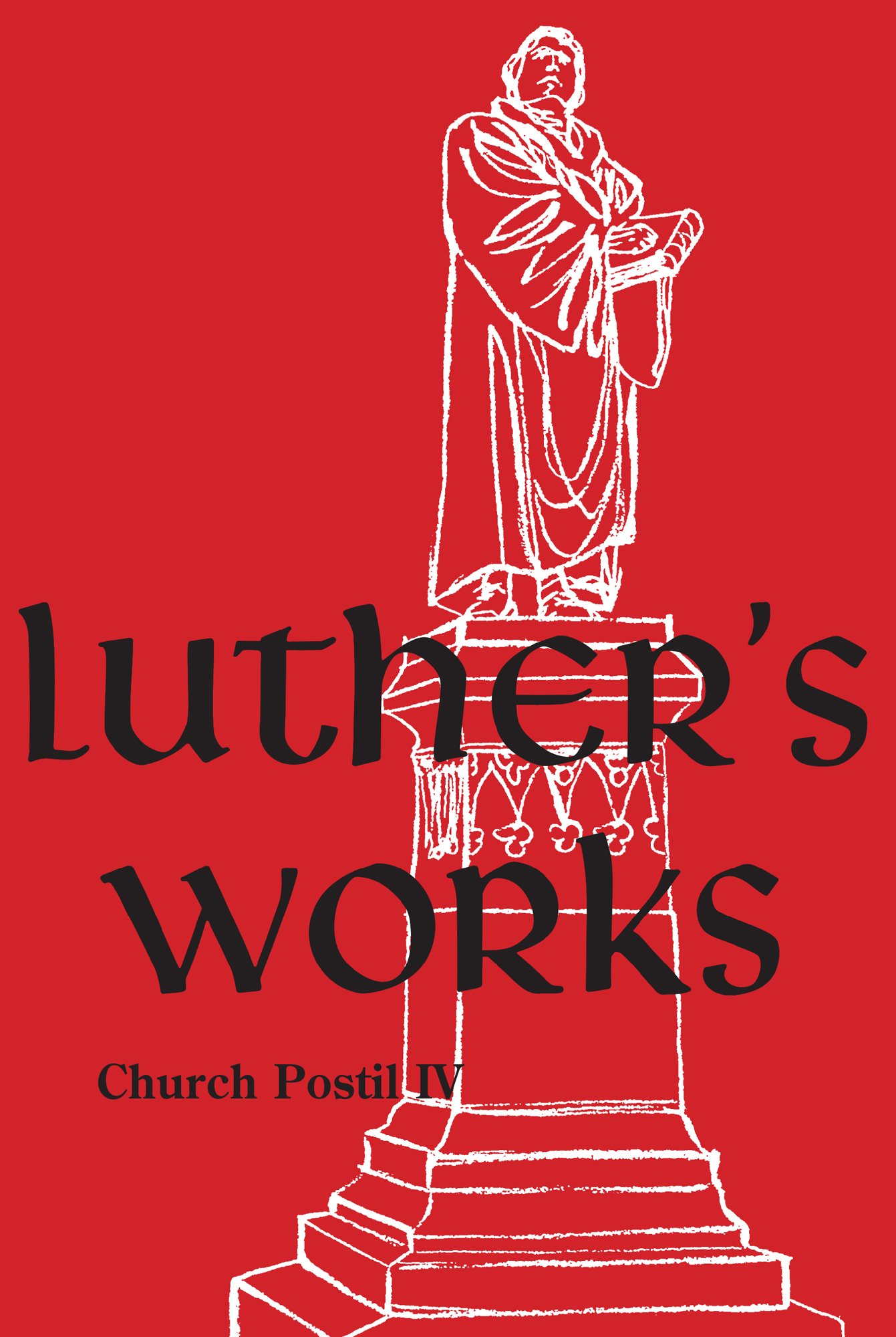 Skip to the beginning of the images gallery
Look Inside
Details
About the Volume
This volume brings forth Luther’s sermons on Epistle and Gospel texts in the historic one-year lectionary series from the Festival of the Holy Trinity through the Tenth Sunday after Trinity. Additionally, this collection features Luther’s sermons on 1 John 4:16–21, never before translated and previously omitted from the Church Postil. Readers will gain new insight from Luther's topics for preaching, including:
Few other books communicated the Gospel to Luther’s contemporaries so powerfully as Luther’s Church Postil (sermons for the church year). Now for the first time, Luther’s authorized, final edition of the Church Postil, edited originally by Caspar Cruciger for the summer half of the year, is presented here in clear English.

In 1535, Luther wrote to a friend, “Concerning the [earlier version of the] postil, you have more respect for it than I do. I would like the whole book to be destroyed. And this is what I am doing: I am entrusting to Dr. Caspar Cruciger the work of re-editing the whole into a new and better form, which would be of benefit to the whole Church everywhere. He is the sort of man, unless love deceives me, who will correspond to Elisha, if I were Elijah (if one may compare small things with great), a man of peace and quiet, to whom I shall commend the church after [I depart] ...”


About the Series
The 28 planned new volumes are intended to reflect both modern and sixteenth-century interests and to expand the coverage of genres underrepresented in the existing volumes, such as Luther's sermons and disputations. The primary basis for the translation is the comprehensive Weimar edition.


Endorsements
“Among the greatest and most prolific theologians of Christian history, Martin Luther still speaks to us today. This 28-volume new series splendidly complements its 55-volume predecessor and offers a treasure-trove of writings never before available in English, writings crucial to understanding Luther’s life, thought, and profound influence throughout the centuries. Offering readable yet reliable translations, well introduced and appropriately annotated, this new series should delight scholars as well as engage laity and clergy.”
—Mark U. Edwards, Jr., Academic Dean, Harvard Divinity School

“Luther’s analysis of human life and his proclamation of God’s merciful deliverance of humankind from sin and evil through Christ ring true across the cultural boundaries of time and space. This supplement to the historic edition of the reformer’s writings, completed a quarter century ago, is bringing significant additions to the texts from his pen than are currently available in English. It will also provide English-language readers access to documents that aid in understanding Luther’s own life and the development of the Wittenberg Reformation. The volumes are being edited according to the highest academic standards and their introductions and notes offer readers helpful guides to the context and content of the reformer’s writings. Casual readers and those seeking to expand and deepen their knowledge of the Reformation will profit greatly from these carefully translated and edited volumes.”
—Robert Kolb , Missions Professor of Systematic Theology, and Director of the Institute for Mission Studies, Concordia Seminary, Saint Louis

“Concordia Publishing House is providing a tremendous service to historians, theologians, pastors, and students by producing these new translations of Luther’s works. The editors have chosen key texts for illustrating Luther’s life and thought, from his earliest works to the biographies written soon after his death. The volumes devoted to Luther’s sermons, lectures, and disputations are especially welcome, because they will give English readers a more complete picture of Luther the preacher and professor.”
—Amy Nelson Burnett, Professor of History, University of Nebraska—Lincoln

Subscribe & Save 30%
Subscribe to the Luther's Works series and save 30% on each volume. Volumes release twice a year and will be shipped to you automatically. To become a subscriber, view the release schedule, or read endorsements visit cph.org/luthersworks.